If anyone knows how to make an open world game, it’s Rockstar. Sure other people make great open world games, but when GTA 3 came out…I’m sure we all know how that was. Before I talk about how awesome the game is, let me remind you it’s definitely not like the console games, especially since it was made for touch controls (which is why it’s on the iPhone, DS, and iPad). It is everything you could expect from a GTA game, lots of action, bad driving, sex, drugs, foul language etc…and it’s great. Like I said it’s been optimized for touch controls, so when you hotwire a car, you have to actually hotwire it by twisting screws, moving wires, then tying them together. It’s pretty cool, it sucks when you’re in a hurry, but cool nonetheless.

Now, I’ll be honest, I haven’t played through the whole game yet, but I know it’s a really long game. If you’re like me, most of the time you’ll be rampaging through the city escaping cops, FBI, and the military. Rockstar sacrificed nothing in bringing this game to the iPhone, it’s a little hard to get used to the top down view, and driving is a bit more difficult too, but other than that, it has everything a GTA game is known to have. I said that already but I wanted to make sure you got it. So far in the story, I’m trying to restore my uncle’s honor, and so far the story is good. Knowing Rockstar, I’m sure I’m in for a good story.

Heres the interesting part; it’s a game this big, on a mobile phone. Can I kill 5 mins of my time with this game? Definitely, I can easily kill 5 mins and hundreds of people without even starting a mission, that’s the great thing about GTA. I can save anywhere as long as I’m not on a mission, which was great on Rockstar’s part because finding my safehouses in a city this big would be problematic if I need to stop playing quickly.

Like I said, the controls have been optimized for touch, with an analog stick for movement and your attack buttons conveniently at your thumbs. It makes rampaging that much easier. They also give you a couple of options for the driving controls, although in my case it doesn’t matter, I crash into anything available to stop because I don’t believe in brakes when it comes to GTA, and I’m a terrible driver. The menus and PDA are very easy to use with gestures to close out emails and maps incase you’re too lazy to press the little back arrow. There are the occasional do it yourself parts while playing, (like hot-wiring a car or breaking out a window), it’s a cool little way to bring you into the game a bit more. 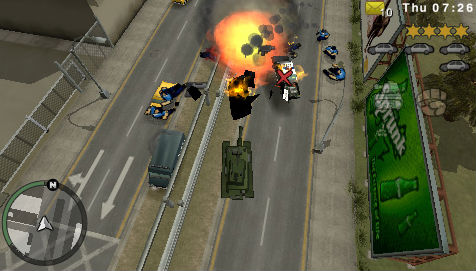 Nothing stunning, it actually looks just like the DS version in my opinion. The cut scenes are the more artistic parts of the game, but the game doesn’t look bad, mostly just different since I’m used to a different style in GTA games.

It’s a GTA game, don’t let the small packaging fool you. Like I said I haven’t played much of it yet, but so far I’m enjoying every part of the game. It did take a little bit to get used to, but like I said, no problem there. Like every GTA game, it does have a lot of radio stations, whether its talk shows or music, and yes, you can customize your own radio station with songs from your iPod playlist. That right there is badass. It doesn’t have any social support, but with Gamecenter finally out on the iOS4 devices, it’s possible they might add at least a few achievements in the future, although I haven’t seen Rockstar do an update on this game. There is no iOS4 support as of right now, so no multitasking, and it hasn’t been updated to the “retina” graphics either. Aside from all of that, this game deserves 4.5 MF’s. It’s a great game, rated 17+ for being GTA, and its worth the $9.99 the only thing that bothers me is that you exit to check an email or and you start from your last save. That’s just me though. 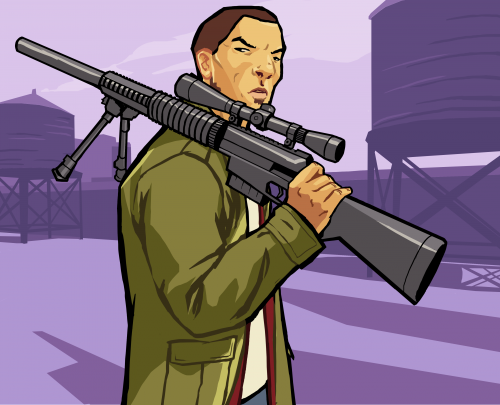 +Major Value for the asking price