Wow seriously? A game like this finally exist? I don’t know if I’ve said it before, but I do plan on making a few games with a friend of mine. One of the ideas I had is actually something similar to the concept in this game, but hey, I’m sure Monad had the idea before me since their game is out already and mine is still mostly a concept.

This is one of the most innovative games I’ve ever played. It’s action and awesome music, it fits very well together, more than you might think. The reason that I’m doing a video review is because I can’t really explain it in words, I really have to show it to you. That being said, it is a short game, though the story is good and really interested me, I was left wanting more at the end. To tell you the truth though, I don’t think this is the last we’ll see of this game.

The story is part Eastern Folklore, where you play as Toshi who has been chosen to stop the demon gate from opening. That’s as much as I can tell you without spoiling it, and I don’t want to spoil this game because it has beautifuly animated cutscenes that will explain everything you need to know.  Gameplay is quick and demands accuracy (more on this in the controls section). The gameplay is also accompanied by an amazing original soundtrack. I’m really hoping they release the soundtrack. 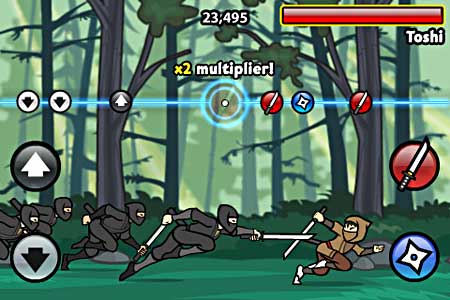 Since this is a rhythm game, you are supposed to hit the appropriate button at the right time. Unfortunately the controls don’t seem to be as optimized as they could be. The timing has to be almost right on the dot, literally, there seems to be almost no room for error, it is easy in some aspects, but I think that it would have been better to use a slightly larger cue. Maybe like a circle outline, just something a little bigger than the dot. There were also times that the buttons responded a litle late, or for some reason a little early, but that last one may have been just me having my fingers to close to the screen.

Like I’ve stated before, being a mobile game, its something I can expect to kill at least 5 minutes with. This game is very mobile, each level only takes about 3-5 minutes to complete. That is without the cutscenes of course. The intriguing storyline adds about 1-2 minutes if you watch it.
This game looks great! Beautifully colored enviroments and characters, lots of creativity put into it as well. The animations could not be smoother. Really not much to say here as it all looks great.

Even though the game has trophies you can unlock, it doesn’t have achievements or leaderboards, so unfortunately you can’t brag to your friends or challenge them to beat a score. Not really a big issue, but its something I’ve kind of gotten used to. Another thing I sort of missed was the lack of multitasking, although I didn’t really want to leave the game anyway. It’s seriously a really fun and challenging game, its definitely worth the .99 cents (I got it for free thanks to Free App A Day!). Unfortunately like I said, it is a short game, you can probably beat it in an hour or less. I’m sure we’ll see more of it though, either with updates or a sequel. 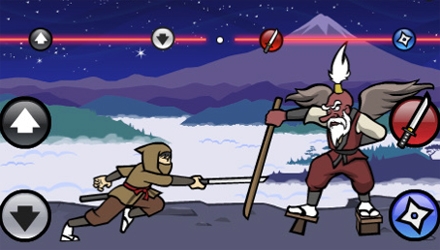 One thing that some people might not like is the controls, but once you get used to them its not as bad. Overall this gets a 4/5 for me, great story and gameplay, even though it’s a little short. The graphics look amazing and clean, I can also start this game anywhere and kill 5 mins. The only problem I have is that the controls could have been a bit better. It is rated 9+ for infrequent to mild cartoon/fantasy violence. So parents, do not let your 8 yr old’s play this game. Now if you’ll excuse me, I have to go back to the game.

-Controls could use a bit of work